On Aenya, time and astronomy are inseparable. This is similar to how ancient peoples conceived of the day/night cycle, with the sun dominating the day, and the moon being associated with night. The role of astronomical bodies on Aenya, however, extends to all aspects of time. Two moons dominate the sky (or one gas giant and one moon), which move about in regular, predictable patterns. The Greater Moon (the gas giant Aenya orbits) is referred to as Infinity (endless time) whereas the smaller moon is called Eon (a billion years).

Instead of hours, people on Aenya measure their day in passings. A passing is roughly 80 minutes, the amount of time it takes for Eon to cross the face of Infinity. Since the larger moon is also moving, Eon can cross from left to right and back again from right to left. You can imagine this as a giant clock in the sky. But the value of a passing is not always accurate, as the orbital speed of these bodies changes depending on location, viewing angle, and time of year. Sometimes, people on Aenya will refer to a half passing or a quarter passing.

Because Aenya is tidally locked to Infinity, one hemisphere perpetually faces away from the sun. There is a misconception that the eastern half of the planet is shrouded in blackness, but the Greater Moon dominates one fourth of its sky, reflecting a considerable amount of light from Solos (the sun), which makes for an eternal, albeit "bright" night, like what we might see on Earth during a full moon.

Though the planet does not rotate, as Earth does, its orbit about Infinity results in similar periods of darkness in and around the central (or twilight) regions. Nightfall occurs when the gas giant moves between Solos and Aenya, which is why night is sometimes referred to as the time of eclipse. At dawn, the sun rises from the western horizon, and at dusk, eclipses behind the moon in the East. 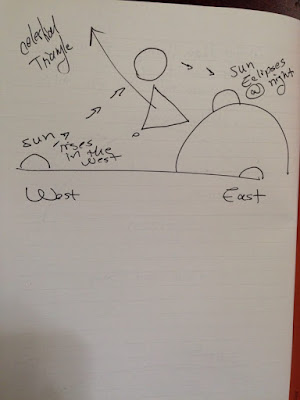 Depending on where you are, and the time of year, the length of day can stretch from nil (no sunlight) to perpetuity (eternal sunlight). The closer one moves into the West, toward the Dead Zones, the lower Infinity sits on the horizon (looking east), and the longer the day. In the desert oasis city of Shemselinihar, for instance, the sun can last for 30 passings. Moving eastward, toward the dark hemisphere, Infinity looms largest on the horizon (looking east), so that, if you're living in Yefira, the sun eclipses after only 8 passings. 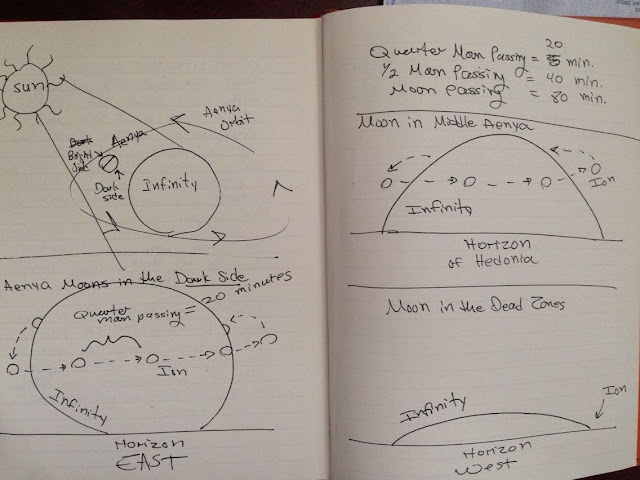 A cycle is ten days, and is similar to a lunar cycle on Earth. It is roughly the time it takes for Infinity to cross the sky from north to south.

These represent the two seasons, which split the year in half. On our world, seasons are determined by the Earth's tilt and rotation, but on Aenya, high and low moon coincide with the apogee (furthest point) and perigee (closest point) of Infinity. During high moon (perigee), Infinity is closest and appears largest in the sky. Because more of the sunlight is being blocked, high moon brings lower temperatures, but this effect is much more pronounced in the North and East. Closer to the equator, where Ilmarinen is located, the change in climate is negligible.
Posted by Unknown at 9:45:00 AM