The Geography of Aenya 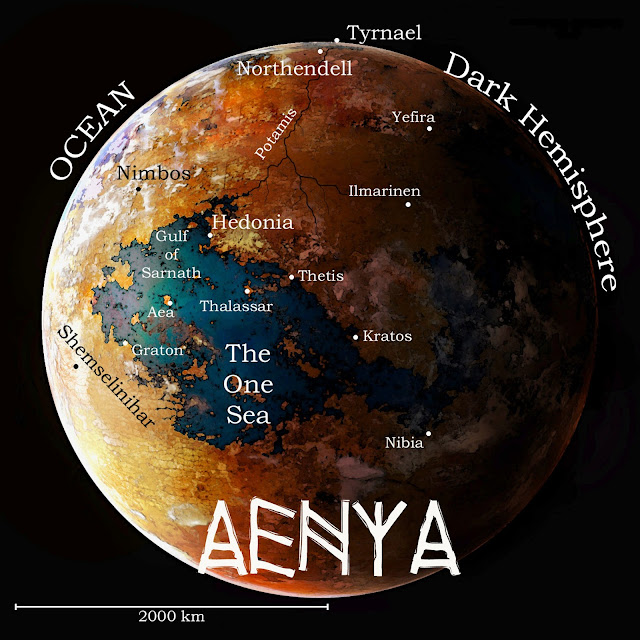 Since J.R.R. Tolkien's The Hobbit, it seems every good fantasy novel needs a map, and I finally got around to making mine (an early version was used for "Enya" in 2004). You'll notice, however, that Aenya is different than most fantasy worlds, in that it is neither an island continent nor a peninsula. Instead, Aenya is depicted as a planet, but the places in which the heroes live out their adventures is limited to the hospitable lands between the scorching West, with its desert "Ocean" or "Dead Zones," and the frigid East, bathed in the perpetual light of the Greater Moon, Infinity.

Aenya is different than most fantasy worlds, in that it is neither an island continent nor peninsula. Instead, Aenya is depicted as a planet, but the places in which the heroes live out their adventures is limited to the hospitable lands between the scorching West, with its desert “Ocean” or “Dead Zones,” and the frigid East, bathed in the perpetual light of the Greater Moon, Infinity.

Tyrnael: Featuring most prominently in The Princess of Aenya, Tyrnael is located at the north pole. Despite its geographic position, an unnatural energy source emanating from the city maintains an ideal climate. Its borders, however, are marked by ice and snow, and an impassable mountain range, The Crown of Aenya. Due to it seclusion, Tyrnael remans isolated from other civilization, and is thought to have been lost to history, or to have been a mere myth, as it is more commonly referred to as Mythradanaiil. Before the Great Cataclysm, circa ten millennia ago, Tyrnael was home to the Zo and the global capital of Aenya. Though its advanced technology has been lost, the genetically modified descendents of the Zo can live for hundreds of years, without sickness or the ailments of aging. Tyrnael is distinguished by its white and gold Compass Tower, centered at the pole; a matrix of interconnected bridges; and its terraced, forested megastructures.

Northendell: Flowing from the stronghold city of Northendell is the Potamis River, “The Lifeblood of Aenya.” It originates from the icy Crown of Aenya (also called the Pewter Mountains) feeding all the lands of Aenya. Being so near to the dark hemisphere, Northendell has been in a perpetual state of war for centuries, as subhuman races from the sunless hemisphere mount annual sieges against it. The city itself is marked by walled fortifications seamlessly adjoining to the surrounding mountains. Upon its highest hill sits Hoarfrost, the enormous mead hall of King Frizzbeard, which is said to have been constructed for heroes to gather and to sing songs, the same heroes who are thought to have laid the first stones of the city. The Delian people chronicle their history and their myths in song, the most renown of which is The Song of Strom.

Alogas: This village, north of the Endless Plains (it’s not really endless!), is home to an equestrian culture. It was featured in my short story, The Nude Equestrian.

Yefira: This small trading town is known for its rolling hills, windmill houses, and airships. It is situated at the edge of the midland tectonic plate, beside “The Great Chasm,” which circles the planet. The ruined base of an enormous bridge, dating back to the time of the Zo, begins to span the divide between the two hemispheres.

Ilmarinen: With a perfect year-round climate, rich soil, and a flower (the ilm) with remarkable medicinal properties, the Ilmar know nothing of war, greed, or shame. The impassable Ukko Mountains to the north, and the dense Wildwood jungle to the south, has kept Ilmarinen hidden from invaders for ten thousand years, that is until recently, when a shift in climate and an invading bogren host forces its people to abandon their ancestral home. Ilmarinen is home to Xandr and Thelana, the heroes of Ages of Aenya.

Hedonia: In a world with only one Sea, coastal land is precious, and the one controlling it rules the world. Ages past, Hedonia used its navies to subdue the neighboring city-states of Thalassar and Thetis, becoming a global empire. Its influence ended after a meteor impact resulted in a tsunami, leaving the city’s defensive walls in ruins. Before that day, Hedonia was known as the “Jewel of the Sea.” It was distinguished by its temples and rotundas and stadiums of marble, and by the great pyramid at its center, housing the churches of the gods of Aenya, and a towering idol of the city’s patron deity, Sargonus.

Aea: This tiny island was once home to a powerful, matriarchal civilization. Though largely forgotten, its people continue to thrive. In temples from another age, an all-female priesthood venerates the three goddesses, Zoe (Life), Maki (War) and Irene (Love and Sex). It is believed that the people of Hedonia originally migrated from here. Aea was featured in the short story, The Gorgon’s Lover or The Ballad of Titian and Midiana.

Nimbos: This cloudy peak is home to the avian race, or “bird people.” Once human, avians achieved flight after centuries of “controlled” evolution. Their home city rises thousands of feet from the peak of Mount Spire, and consists of a peculiar light mix of elements called “whisperstone,” allowing for structures that defy any known building conventions.

Graton: This small fishing village and trading town is known for its lighthouse and astronomical observatory. It is commonly used as a way port for goods to be transferred between the western city-states of Hedonia, Thalassar and Thetis, and the eastern oasis kingdom of Shemselinihar. This town will be prominently featured in the third Aenya novel, “The Children of Aenya.”

Shemselinihar: Located in the midst of the Great White Flat, this domed city, also called “The White City,” is home to the assai, who also referred to as Shemites. The assai are notoriously reclusive and territorial, placing considerable emphasis on tradition, and their monotheistic faith to the one “true” god, “Un.”

The boundary of the dark hemisphere is not constant, since it is not a geographically determined region. Just as the length of an afternoon changes here on Earth, depending on the seasons, so does the night side change on Aenya. Further to the north, the dark hemisphere creeps deeper and remains longer, during what is called "High Moon." This is similar to what happens in Scandinavia, where night can last for 20+ hours. On Aenya, Infinity is most visible in the sky during High Moon, and temperatures are at their lowest. This is also when the bogren and horg march from their lands to invade Northendell.

Whenever I look at a fantasy map, whether it's Middle Earth or Westeros, I am forced to wonder, "where are the boundaries? Where is this located in space? Is it even in space? Is it even round?" According to the Silmarillion, the sun in Tolkien's world is a fruit, fallen from the tree of Valinor. But for someone who loves Sci-Fi and astronomy, I simply cannot wrap my head around such nonsense. For me, Aenya can only be a planet, and being "tidally locked" to a gas giant (a Jupiter-like planet) makes for great story potential, I think. Because one side perpetually faces Infinity, the eastern hemisphere remains dark and cold. To survive, the humans once living there burrowed deep under the planet's crust, evolving into bogrens. Conversely, the side facing the sun is too hot for any life to thrive or develop. On the hospitable lands situated between the night and the day, the people must struggle, going often to war over resources.

In making this map, I figured Aenya to be a little smaller than Earth (about the circumference of Mars). Despite its size, most of the land is uninhabitable. All of the action takes place in and around the One Sea, which is approximately the area of the Mediterranean, and the Potamis River (which is longer than the Nile and broader than the Amazon). The surrounding area is comparable to that of Europe.

Want to know more about the science of Aenya? Check out this e-mail I sent to my favorite astronomer, Neil deGrasse Tyson. While he didn't get back to me personally, Alejandro Nunez of the Hayden Planetarium was kind enough to give me his feedback, Hayden Planetarium on the Aenya-Moon System.
Posted by Nick Alimonos at 10:52:00 AM