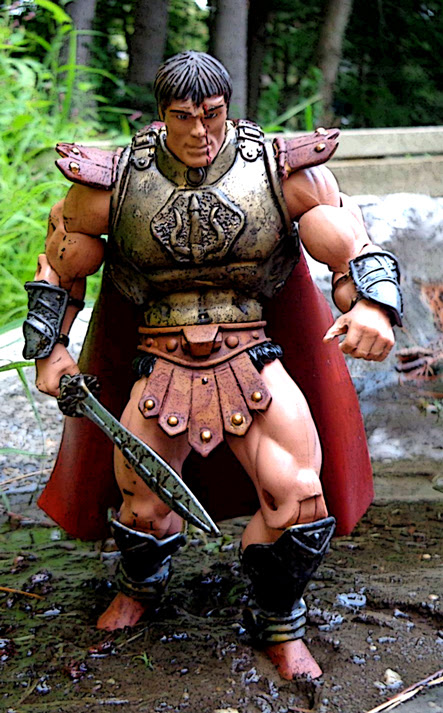 BIO: Like all eight year old boys of Hedonian citizenry, Demacharon was taken from his mother's arms to train in the Hedonian navy, and for the next ten years was taught discipline, and how to kill efficiently. He would later move up in rank, from a lowly oarsman to captain of his own vessel. After a number of decisive naval victories against rebelling coastal city states led by Thalassar, Demacharon was promoted to Regent Commander of the North, at which point he became charged with the subjugation of the peoples who did not yet pay tribute to the empire. After two decades campaigning, Demacharon was permitted to take a wife, a chambermaid named Niobe. The honeymoon was short lived, however, as Demacharon was sent out again and again, to either defend a border, quell a rebellion or expand the territories. Never in all that time did he question the rightness of his duties, for he had been taught since childhood that the glory of the empire was an absolute good, and the superiority of their way of life was to be defended at any cost. And yet, far north of the One Sea, in the wild, unmapped territories, his legions met with increased resistance. Many "barbarian" peoples chose death to subjugation, fighting to the last man, woman and child. Though never knowing defeat, the terrible cost of victory would haunt him for the rest of his days. Despite heavy losses, Demacharon's men remained unwavering in their loyalty. This may be attributed to his courage in the vanguard, and that he never accepted any comfort that the lowest in rank did not also receive. Once, as throats ran dry crossing through the Great White Flat, Demacharon was forced by his men to drink at the point of a spear. Less than half his men, a mere nine thousand of the thirty that were sent out, returned to Hedonia. Half were buried along the road, having succumbed to infection, disease and hunger. In the city, however, Demacharon was heralded a hero, given a parade, lands and titles, including that of Supreme Commander. Only one man, the High Priest Urukjinn, stood above him. But the ghosts of his friends and enemies continued to haunt his dreams, and with the birth of his child, Astor, he began to doubt. Did he desire such a life for his only son? And how could he justify the murder of barbarian children, knowing what it meant to be a father? Soon after his return, five-year old Astor was killed on the beach by merquid, after which his wife, Niobe, receded into herself, overcome by despair. Having lost the two things that meant anything to him, Demacharon became disillusioned, a broken man in search of redemption.

Appearances: Ages of Aenya, The Princess of Aenya
For more: See AENYA RPG