You are a primitive outcast. Since the beginnings of human history, your kind has survived in the wilds of Aenya, hiding in the mountains, river valleys and forests. You excel at simple toolmaking, favoring obsidian daggers, spears and atlatls. Most of your time is spent gathering, farming or hunting. War, government and currency are alien concepts to you. Beyond the borders of your home, you are seen as primitive and barbaric, especially in largely populated areas. While you do not normally wear clothing, you will try to blend in by adopting local customs.

Religion: You believe in the Goddess, Alashiya, the spirit of nature who dwells in all things and is part of all things.

What matters most: Family


You are a proud soldier of the Empire. At age eight, you were taken from your parents to live in a barracks with other boys your age. There, you were taught to make war, to obey and not question orders. Your home city is the wealthiest and most powerful on the planet and your people command the greatest port and the largest fleet. On Aenya, there is but the One Sea, and it belongs to you. Wherever you go, people both fear and admire you. But this reputation did not come easily. Rivers of blood were shed for the glory of Hedonia. Countless lives were paid to ensure freedom for both you and your loved ones. As centurion, it is your duty to make certain your ancestors did not die in vain.

Religion: Your people believe in Sargonus, God the of Sea, but you have been taught to rely more on your wits than in gods.

What matters most: Honor


You come from a long line of strong, rugged people. Every moment is one spent proving yourself. In all things you must excel. When drinking, outdrink everyone at the table. When brawling, brawl until you can no longer stand. When speaking, do so with the most conviction, and you will be thought the wiser. Moderation is for the weak. Live every moment to the utmost, for death can come at any moment. When you are not brawling or drinking, you love a good story told well, especially if it involves courage against overwhelming odds. Your ancestors represent the ideal; and they will always remain stronger and braver than you can ever be.

Religion: You believe in Strom, god of thunder and battle.

What matters most: Courage 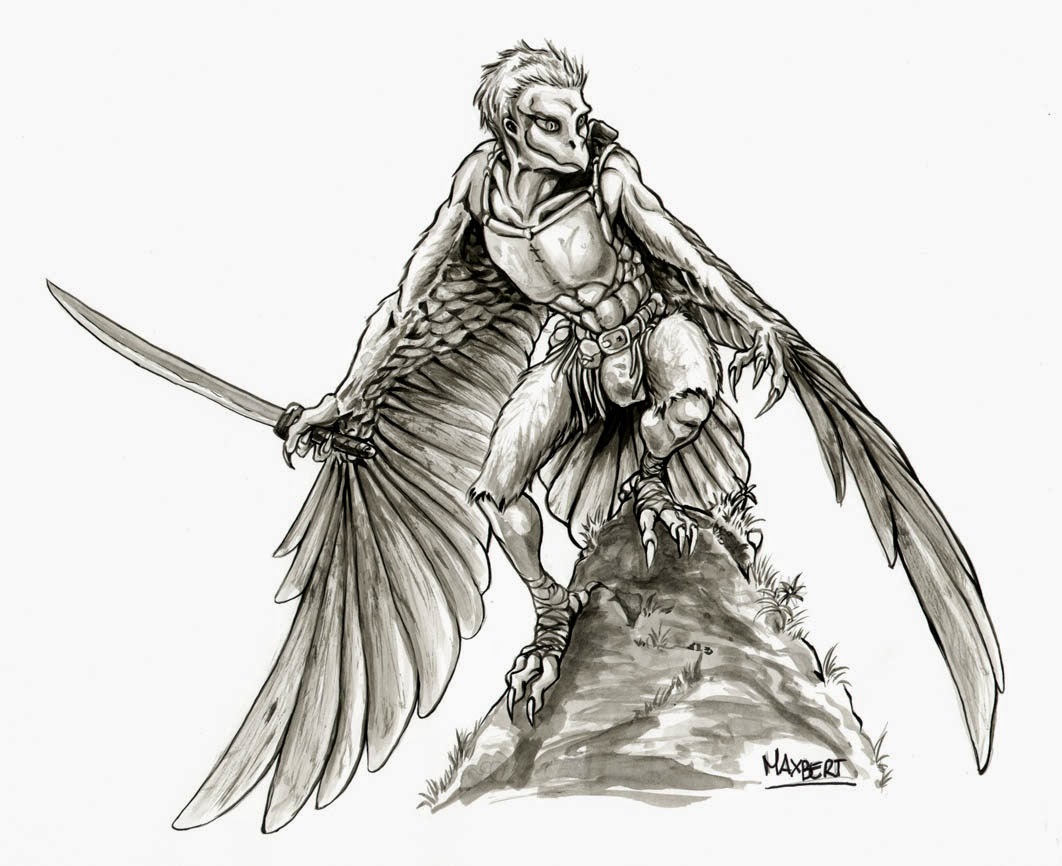 As a being who can fly, you look down upon most of humanity, assured of your moral and intellectual superiority. To you, humans are excessively warlike and simple, unworthy of the lofty kingdoms you inhabit. But while most of your kin keep to their own, some like yourself are curious, often dropping from the clouds to inspect a village or give counsel to a king, whether it is asked for or not. A few avians have also been known, out of boredom, to take jobs as messengers.

Religion: There is no specific god to which you pray, but you believe in the Ascendency, a fabled hierarchy of beings, beginning with the king of the bird people and ascending upwards to the highest reaches of the sky, where only the purest of beings are said to dwell for eternity.

What matters most: Life