Merquid (singular or plural), otherwise known as gill, or waterlings to the avian people, are relatively benign, reclusive creatures. It is thought they are the oldest intelligent species on Aenya. Tales of sailors encountering merquid can be found among the most ancient of Hedonian and Shemseliniharan texts, featuring prominently in the Ages of Aenya and among the myths and lore of coastal cities and villages. Before the Great Cataclysm, merquid dominated the planet, living in ocean-vast cities that have since become desert. What remains of their species is now concentrated along the coasts and depths of the One Sea.

PHYSICAL ATTRIBUTES: Merquid are amphibious anthropoids, but despite their humanoid like appearance, differ biologically in significant ways, and having evolved independently, are of no relation to humans or other humanoid species. Their hide consists of a waxy membrane not dissimilar to a jellyfish, reinforced by chitinous, fish like scales. The torso narrows much more than a human, so that a fully grown adult, at 5' in height, measures from shoulder to shoulder like a ten year old boy, tapering to a waist half that width. This shape allows the merquid to glide effortlessly through the water, but on land serves as a disadvantage; being top heavy and unaccustomed to bipedal movement, merquid move slowly and awkwardly on land. While merquid possess both gills and mammalian-type lungs, allowing them to breathe in and out of water, their tender membranes dry quickly. A merquid can die of bodily "thirst" after a single day without moisture. While benign in appearance, merquid can become terrifying when threatened or hunting prey. With a set of retractable teeth, much like an angler fish in appearance, and barbed claws and wide glossy eyes the size of teacups, a distressed merquid can give any sailor pause. Depending on the region of the Sea from which they spawn, merquid may differ in size, color and with regards to the shape and location of their fins, as might types of shark. While these other groups, or schools, are thought to be of another species, this is a misconception, owing to the fact that a majority of merquid are encountered by fishermen in and around the coast of Sarnath, and little to nothing is known of their kind from lesser explored parts of the Sea.

HISTORY: While next to nothing is known of their history, merquid once congregated along the coasts of the One Sea, building strange monuments of coral. But with the rise of human settlements, violence against the species became common. At Sarnath, upon which the city of Hedonia was founded, merquid were hunted down and burned, and as the species is relatively peaceful and soft bodied, they had no recourse but to return to the depths. For this reason, it is believed, merquid avoid confrontations with humans to this day.

CULTURE: Owing to their alien minds, comprehension of merquid culture may be nigh impossible, which might explain the many misunderstandings and resentments between human and merquid over the ages. Among their many oddities, there is no concept of action or use of any verbs in the merquid language. Everything in their society can be described as simply a state of "being." Their perception of time may also differ. Vocal sounds are made through a number of water-filled cavities in their skulls, making their language impossible for others to learn or speak, but varies enough so that merquid can mimic any sound to communicate with any species. Females lay spherical eggs the size of melons, which are often mistaken for giant pearls due to their color and texture. Every year, tens of thousands of eggs are produced. Males move them into protective coral houses, known as pods, while fending off predators. After only thirty days, eggs from the same pod hatch simultaneously. Newborns swarm among the females without any affinity for the biological parent. Merquid exist solely for the community, without any concept of marriage or family. In defense of their offspring, however, they are aggressive and violent, and will not think twice before giving their lives to preserve the species as a whole. Though rare, merquid may go rogue, separating themselves from their schools to travel the Sea. Encounters with humans have resulted in limited trade and emulation of human habits. While land fabrics typically disintegrate in salt water after time, merquid have developed aquatic alternatives, using shell, pearl and seaweeds with which to adorn themselves.

TECHNOLOGY: Merquid use primitive tools made of shell, coral and barbs from urchins and mollusks. Much of their technology is based on a type of symbiosis with other aquatic species. While their relationship with other living organisms remains a mystery, merquid have been known to manipulate massive crustacean and cephalopods to their purposes.

RELIGION: Even less is known of merquid religion, if one exists as humans perceive it. According to the High Priests of Hedonia, merquid worship an enormous squid known as Gulgola, which may or may not refer to Tsunamis, a monster described by Omeos, a Hedonian poet.


I looked out across the waters
and there came Tsunamis
mightiest of the depth’s demons
that with flailing arms,
shook the seas,
and split beams of ships,
and made cities fall
—Omeos, Hedonian poet 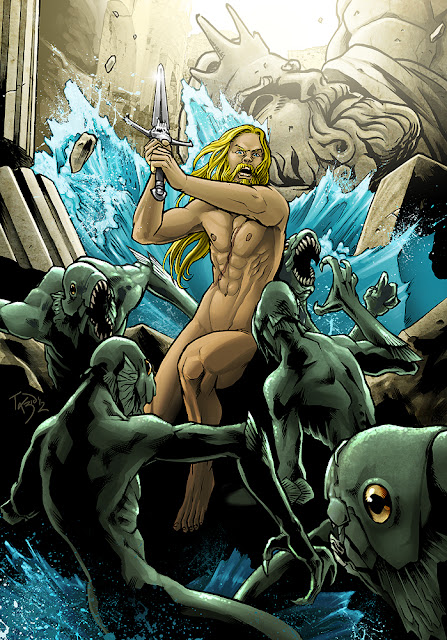