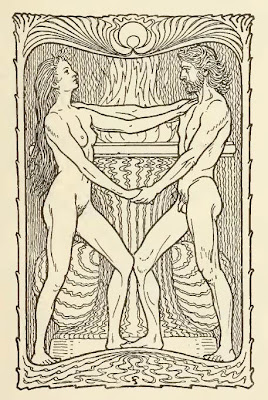 The Ilmar (plural) or Ilmarin (singular, descriptive) go by many names: savages, barbarians, wild humans. Given their propensity for nakedness and for living in the wild, they are viewed by civilized people as more animal than human. This prejudiced view is perpetuated by the little that is known of the Ilmarin way of life. Due to these misconceptions, Ilmar are often forced into wars or labor camps, or, ostracized by society, become beggars and prostitutes. Believed to be sexually promiscuous, Ilmarin women are often raped, or taken as sex slaves. A lucky few become wives, adopting local customs, while keeping their heritage a secret.

PHYSICAL ATTRIBUTES:
Biologically, the Ilmar are as human as any group calling itself by that name. Once subsumed into other cultures, they are difficult to distinguish from other races, aside from a darker skin tone and lightly colored, almost translucent eyes. Despite evolving in an ideal climate, Ilmarin skin is thicker, and more resistant to extreme temperatures. Never knowing shoes, the soles of their feet can be as hard as leather. A rugged landscape of hills, mountains and river valleys, and a limited diet, helps the Ilmar maintain a lean, muscular physique.

HISTORY:
The Ilmar are the last vestiges of proto-human, the earliest humans to have evolved on the planet. According to an inscription found within a Septheran ruin, the first word for human was 'ilma,' which the Ilmar use to denote their species, as they do not recognize themselves as a separate social group. The proto-human lived peaceably for one hundred thousand to one million years, until the arrival of the Septhera c. 10,000 BGM. Finding the dominant species of Aenya defenseless, the reptilian race conquered the planet with ease, enslaving all of humanity except for a small population hidden in the mountains of Ukko. There, the proto-human continued to thrive, oblivious to the changes occurring beyond his borders. It was not until 5 BGM that the people in the river valleys of Ukko were discovered by a Zo researcher known as Kjus, who became so enamored by their simple way of life, that he abandoned his own society to become one of them. Kjus named the people 'Ilmar' and the land 'Ilmarinen,' meaning 'land of ilms,' after the ilm, a flower of orange and violet that grows in abundance there, though the name can also be translated to mean, 'land of humans'. Kjus taught them of science, history, philosophy and medicine, but made certain not to pollute their culture with the excesses of his own civilization. To protect the knowledge of the Zo, he built a monastery high in the mountains, and before his death, founded the Order of Alashiya, who are also known as the Keepers.

CULTURE AND SOCIETY:
Knowing nothing of war, crime, or government, the Ilmar live a simple agrarian life. Since everything in their community is shared, they have no concept of currency, of wealth or poverty. As one saying goes, "No man is poor who wants for nothing." Much of their day is spent farming and gathering, though Ilmar are known to hunt during food shortages. In their leisure time, they enjoy singing, dancing, and conversing. Through song and dance, they relate their myths and their history. The holiest time is the Solstice Night, the longest night of the year, when families throughout the land join to celebrate life, love and creation. It is during this time that boys and girls of a certain age, showing hair about the loins, pair off to jump the sacred bonfire, after which the pair is forever joined. It is believed that during this ceremony, the souls of lovers from past lives find one another again. Contrary to what many believe, the Ilmar do not engage in orgies or fornicate recklessly, but only with those with whom they are joined. When Solstice Night ends, it is expected that the female move into the male household, and by the following year, that she bear him a child. Having many children is regarded the highest honor for women. Despite their duty as mothers, however, females are given greater status than males, since it is the female that has power to create life.

The Ilmar lack many technologies, but are skilled wood-smiths and clay workers. Their artifacts include elaborately carved farming tools, throwing spears, atlatls, and pottery. They also excel in the shaping of trees to produce "living homes." Giant camphor and oak are hollowed out to make bedrooms and kitchens, though eating, bathing and grooming is typically an outdoor activity. As they are without any concept of crime, the Ilmar do not have doors or locks, though partitions may include curtains of bead or bone.

LANGUAGE AND CUSTOM:
For the Ilmar, concepts of body shame do not exist. Clothing is entirely unknown to them, nor do they produce material that might be used as clothing. Genitals are regarded no differently than other parts of the body. Likewise, they have no word in their language for nude or naked, nor words that mean secret, lie (deception), or honesty. During their menstrual cycles, women camp by the river, where their blood is offered to the gods. The Ilmar are not, however, without a sense of style or individuality, and will decorate their bodies with flowers, bones, semi-precious stones like jade or lapis lazuli, and with elaborate patterns of mud called henna. Neither sex cuts its hair. Women wear a single braid which can reach down to their ankles, while the men can grow their locks to the middle of the back, either loose or in multiple braids.

To foreign ears, the Ilmarin language sounds hard and clipped as they often use conjoined consonances. Common names include Xandr, Baldr, Heimdl, and Borz. Female names typically avoid the conjoined consonant, and end in 'a'. Examples are Thelana, Aliaa and Anja.

RELIGION:
To the Ilmar, all life is sacred, from the smallest insect to the greatest camphor tree. They make no distinction between human or sentient life and animal or non-sentient (plant) life. All are part of a singular essence known as the Mother Goddess, or Alashiya. The goddess is thought to exist everywhere and in all things, even in non-living matter, such as in the wind, in sunlight and in the earth. Alashiya is never seen or heard, but can be "sensed" through the skin. According to myth, the Goddess was born of two elder gods, Anu and Eru. At the beginning of time, these primordial deities danced through the astral void, singing to one another and making love continually, birthing new worlds in the process. After Aenya and Alashiya were created, the elder gods moved on.

The Ilmar do not consider dreams separate from reality. Each and every dream is a literal experience. By grinding the ilm flower into a fine powder and drinking it, ritual leaders embark upon purposeful dream journeys, which, they believe, can take them across time and space, into other dimensions, and to worlds beyond death.

In death, the Ilmar believe they become one with Alashiya, as they were before birth. The body is marked by a cairn close to home, typically under a tree, which is then absorbed into the soil to become new life. Due to limited medicine and nutrition, the average lifespan for the Ilmar is sixty years.