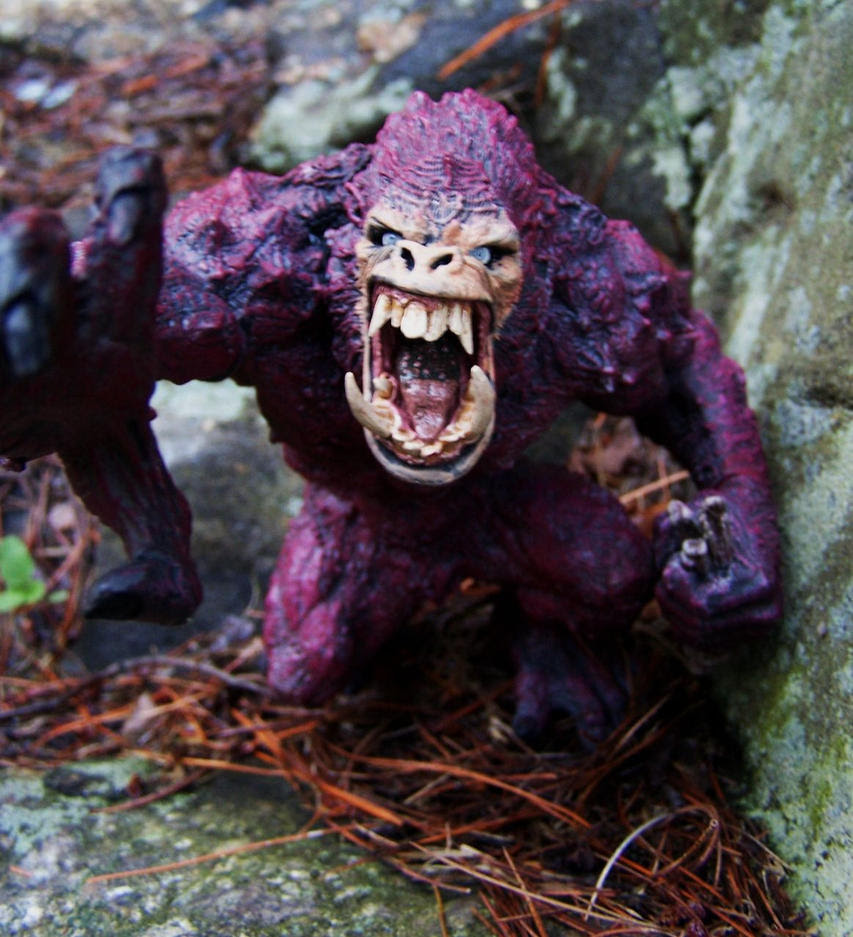 It is believed the name half man or halfman originated with the Zo, who considered the halfman to be, in evolutionary terms, between beast and man. The nomenclature is in no way scientific, however, as the halfman shares 98% DNA with humans. Being a fearsome predator and omnivorous, the halfman is well suited to survival. Barring any cataclysm that might alter its habitat, the halfman is unlikely to evolve into a more human like state.

HISTORY: Halfmen did not evolve from humans, like the bogren and the horg, but share a common ancestor. They thrive primarily in tropical rain forests. After the Great Cataclysm, mass deforestation and loss of prey reduced their numbers to near extinction levels, as with 99% of all other species. No more than a thousand are thought to remain in the wildwood near Kratos, but since the wildwood is too vast and dangerous to be charted, precise numbers are impossible to ascertain.

PHYSICAL ATTRIBUTES: Halfmen are truly terrifying to encounter. Adult males have been weighed at between 350 to 400 lbs. Their spines are curved so that they appear to be stooping, and they walk partly on their knuckles, supporting their weight on massive arms the length and breadth of which equal their thighs. In its natural position, the halfman stands between 6′ and 6 1/2′ tall, but a fully stretched corpse has been measured at more than 7′ from head to toe. A halfman skull is characterized by deep set eye sockets, a wide nostril ridge, and extremely long, jagged teeth of about 3″ to 4″. Like human fingernails, halfman teeth grow continuously, often pushing out older teeth. Its claws possess similar qualities. The halfman’s most striking feature is its shaggy fur, which reddens with age from yellow (at birth) to orange (children) to red (young adult) to crimson (aged).

BEHAVIOR: Halfmen are solitary hunters rarely seen with others of its kind. Adult males have been known to kill each other over a kill, which might explain their preference for seclusion. They prefer ambush tactics to direct chases, hiding high in the treetops under cover of foliage. The halfman kills in a variety of ways, including breaking the spines of smaller prey, bashing skulls in with rocks, even using pointed weapons against larger prey. Its claws, though lethal, are used primarily for wounding. Should the halfman’s quarry escape the initial ambush, the halfman is not averse to giving chase. With remarkable speed and agility, a combination of bipedal movement and swinging from branches, they can outrun most creatures of the forest.

SOCIETY: Being that its resemblance to humans is minimal, the name half man may refer, instead, to the species’ human like intelligence. Halfmen use language (but cannot write), bury their dead, and can make fire and simple tools. These tools consist of clubs, crude obsidian tipped spears, daggers with obsidian shafts, and hammers made with stones and sticks fastened by twine. They will adorn themselves in the blood of their kill, to darken their fur and grow their social standing, and may also wear trophies of bone and sinew. Despite their intellect, they are utterly lacking in curiosity, prone to superstition, and easily fearful. They have even been known to hide from a thunderstorm. When it comes to foreign species, halfmen are shy and reclusive, just as likely to hide from a human as to attack one. But they are quite social among their own kind. Villages consist of a central fire pit, used for cooking and heating, and crudely thatched huts made of mud, straw and sticks. Except for hunting or to look for water, halfmen rarely wander far from their tribe, and even then, it is only the adult males who do so. Females and children have never been seen in the wild. For this reason, it is believed that they are extremely protective of their families. Halfmen rarely migrate, but if forced to abandon their homes, they make certain to hide any evidence of habitation.

The eldest and most revered of the species is the shaman. Though never proven to exist, Kratan rangers describe the shaman as a blood-red creature with loose fur, bone piercings, and bone trinkets. Shamans are said to carry small carved objects called totems. Through use of the totem, the shaman is thought to curry favor from the gods.
Posted by Nick Alimonos at 12:04:00 PM