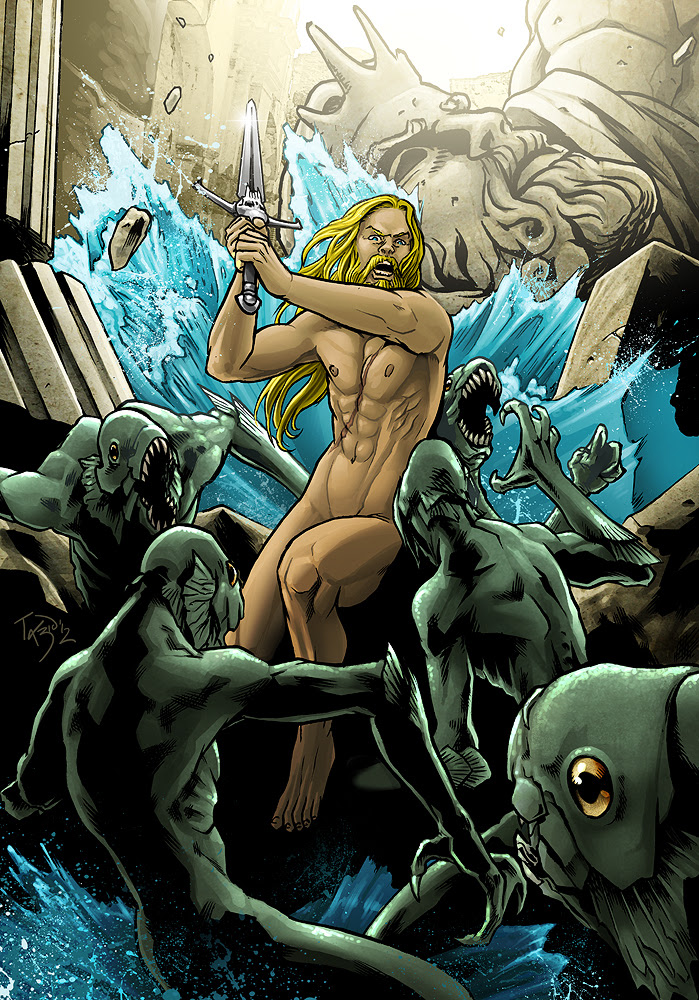 Cast off from civilization, Xandr is without home or country or possessions of any kind, but for an ancient sword with a will of its own. Utterly naked in battle, he stands intrepid and shameless, as his people, the Ilmar, have stood for millions of years. But he is never defenseless, for his shield is the Goddess, planet Aenya herself---Alashiya---and he is strengthened by the convictions instilled in him by his mentor, keeper of the lore and wisdom of his people.


Bio:
Ilmarin by birth, Xandr is raised by monks in the Mountains of Ukko, where he is taught history, philosophy and swordplay. At fourteen, his home is destroyed by armies from the dark hemisphere. With the death of QuasiI, his mentor and father figure, Xandr becomes a recluse, with only an enigmatic sword---Emmaxis---to guide him. He wanders the wilds of Aenya alone until he meets the bird man, Ouranos. Together they set forth to undo the evils of the world, but in time Xandr falls into despair. Shunned as a barbarian by the civilized peoples of Aenya, he remains in the Marsh of Melancholy until called to the city of Hedonia. There he finds the one thing he never thought possible, another of his kind. Thelana is a beautiful thief and warrior sentenced to die for her crimes against the Hedonian god. As Xandr seeks desperately to rescue her from the dungeons of a zealous civilization, he must also find the strength in himself to fight for a world that has rejected him and his people.

Having never known clothing, the Ilmar have tougher skin than other humans, especially at the soles of their feet, which is more like shoe leather. Other Ilmarin attributes include olive to bronze skin, light color hair, and very light, almost translucent eyes. In heavily populated areas, Xandr adapts to local customs with a bare minimum loincloth or kilt.

Excerpt from Ages of Aenya:

From the time he stumbled out of Ilmarinen as a boy, his nakedness was met with averted eyes, shouted insults, sometimes stones. They called him savage, and spoke of primitive people, like the Ilmar, as if less than human, so that in time he learned that the outside world hated him and his ilk. Mankind should share no affinity to animals or to the lesser species. Civilized gods taught that humans were separate and above other life forms, fashioned by the divine from a different substance. But his gods were not theirs. In cities, they worshiped before altars of stone, venerating symbols, idols of gold and silver and all that was rare beneath the earth. To the Ilmar, only things that grew were precious—life—and so Xandr rejected the local taboos, choosing seclusion over conformity, living far from the places where populations amassed. He was a man without home, without country, without kin. Having nothing, he feared nothing. Fearlessness served him in the untamed lands, in the dark, wild, lost places of Aenya, where the city-born went to die. But if he were to enter into Hedonia, the very heart of the civilized world, he knew he could not go as himself. Xandr would need to hide behind custom, become familiar with the trappings of men. Learning to wear clothing would not be enough. Having survived, until now, by hunting and gathering, he had no currency and nothing with which to barter. His only possessions were his body and his weapons.
Posted by Nick Alimonos at 9:19:00 PM