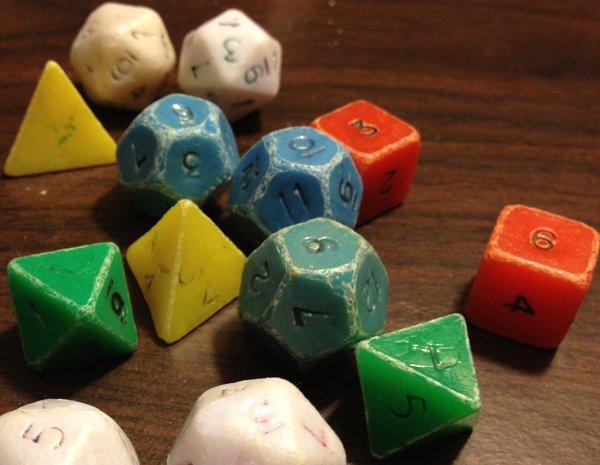 For me, a tabletop RPG is the most fun you can have with a group of people. You may have played something similar on a computer or with a game console, except in a traditional RPG, all the characters, monsters and places exist in your head. While this may sound less appealing at first, tabletop RPG’s offer so much more in terms of possibilities. Since the game exists entirely in your imagination, there is no limit to who you can be and what you can do.

In its most basic form, an RPG or “role playing game” is a kind of communal story telling. It’s about creating a shared experience that is both fun and memorable for everyone involved. The best way to describe it is “playing pretend for older people” or “playing pretend with dice and numbers.”

There are two types of players in every RPG: the player-character and the GM or “Game Master”. The player is like an actor without a script. He or she decides how the character will react to any given situation. When confronted with a threat, do you run away in terror or face the danger with sword in hand? Do you make alliances with the other players’ characters or stab them in the back and take off with their gold? The goal of the GM, on the other hand, is to ensure everybody is fully immersed in the game’s imaginary world. The GM is the story teller, the director and the referee. The goal of the GM is not to “beat” the players. There is no “winning” in a real role-playing games. Just like any novel, the game ends when the GM concludes the story.

So what are all these numbers for?

Tabletop RPG’s utilize a lot of numbers and dice, which can be daunting, at first. And yet, I have played entire adventures without having to look at a single number. Much of the game depends on the style people prefer and the kinds of story telling the GM likes to tell. Dice rolling comes into play when someone makes an action that the GM leaves to chance. A story telling session might go something like this:

GM: You are running as fast as you can, feeling the broken terrain beneath your bare feet, but the bogrens are getting closer. You come to the edge of the forest where, dropping ten feet below, a river cuts through the valley. A rope bridge crosses to the other side, but it looks rather worn. What do you do?

Jasmine (playing Thelana): Can I jump to any of the rocks below?

GM: You can try, but there is a chance of falling. Hurry, you can hear the bogrens getting closer.

GM: You run across it as it starts to collapse. Roll (the dice) to see if you grab onto something.

The above situation called for an action roll. Dice rolling falls into two categories: action rolls and battle rolls.

Battle (melee): Battle occurs when a character meets a monster or when two characters cross paths and wish to fight.

Ø In melee, an initiative roll is made using a d6 (a six sided dice) to determine which character reacts faster; the player with the higher number makes the first attack.

Ø Attacks are made with the d20 (20 sided dice). If the roll equals or exceeds the target’s ARMOR, the hit succeeds, and HEALTH points are taken equal to the attacker’s damage.

Ø For characters, damage is determined by the type of weapon being used. A short sword, for instance, deals 2 dmg.; this is written as: short sword 2. For monsters who do not use weapons, damage may be listed simply: dmg 3.

Ø The GM rolls dice for enemies.

Ø If a battle is going badly, a player may flee by rolling 3 or 6; each failed attempt incurs a free attack.

Battle (ranged): Certain weapons allow for ranged attacks. A ranged attack can be made: if the target is within range, a clear shot (nothing in the way), and a straight shot (no shooting around corners). Ranged attacks can be made while moving or standing still. When a character moves into the range of another, the one standing wins initiative, even if not their turn. Ranged attacks cannot be made in melee (on the same point).


ARMOR BREAKDOWN (WHAT THE NUMBERS MEAN)


ACTIONS
An action is anything the player can imagine doing, from running along a wall to somersaulting through a ring of fire---the more creative the action the better. It is up to the GM to assign a difficulty for each action from 1 to 20:

EXAMPLES OF ACTIONS AND THEIR DIFFICULTY

Advice for GM’s: When calculating Difficulty, consider it as pertaining to the average human—so while jumping across a 15 foot chasm may seem Damn Near Impossible for Joe the Peasant, it might actually be easy for a monk with an impressive Agility Bonus.